Sonnet 68: In Days Long Since, Before These Last So Bad

You are here: Home1 / Shakespeare’s Sonnets2 / Sonnet 68: In Days Long Since, Before These Last So Bad

In days long since, before these last so bad.
Thus is his cheek the map of days outworn,
When beauty lived and died as flowers do now,
Before these bastard signs of fair were born,
Or durst inhabit on a living brow;
Before the golden tresses of the dead,
The right of sepulchres, were shorn away,
To live a second life on second head;
Ere beauty’s dead fleece made another gay:
In him those holy antique hours are seen,
Without all ornament, itself and true,
Making no summer of another’s green,
Robbing no old to dress his beauty new;
And him as for a map doth Nature store,
To show false Art what beauty was of yore.

And so, his face is a map of times past – when beautiful people lived and died with the transience of flowers – before such illegitimate signs of beauty were created, or there was any thought of stamping them on the face of a living person; before the golden locks of dead bodies, which rightly belong in graves, were shorn to be made into wigs for living heads; before the beautiful fleece of dead people served to make living people happy. You can see those ancient times in his unadorned, naturally beautiful, face, which doesn’t capitalise on another’s glory, nor does he rob the old to adorn his beauty. Nature keeps him as a map to make a comparison between the cosmetic beauty of today and real beauty as it used to be.

Watch a performance of Shakespeare’s sonnet 68 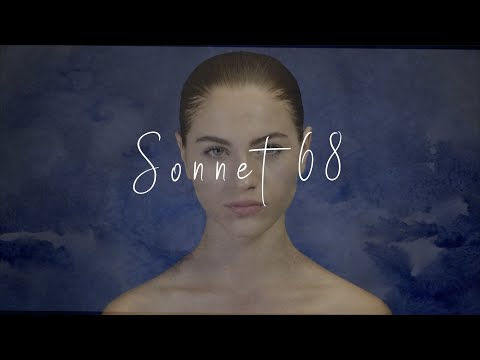 THus is his cheeke the map of daies out-worne,
When beauty liu’d and dy’ed as flowers do now,
Before thee baſtard ſignes of faire were borne,
Or durſt inhabit on a liuing brow:
Before the goulden treſſes of the dead,
The right of ſepulchers,were ſhorne away,
To liue a ſcond life on ſecond head,
Ere beauties dead fleece made another gay:
In him thoſe holy antique howers are ſeene,
Without all ornament,it ſelfe and true,
Making no ſummer of an others greene,
Robbing no ould to dreſſe his beauty new,
And him as for a map doth Nature ſtore,
To ſhew faulſe Art what beauty was of yore.